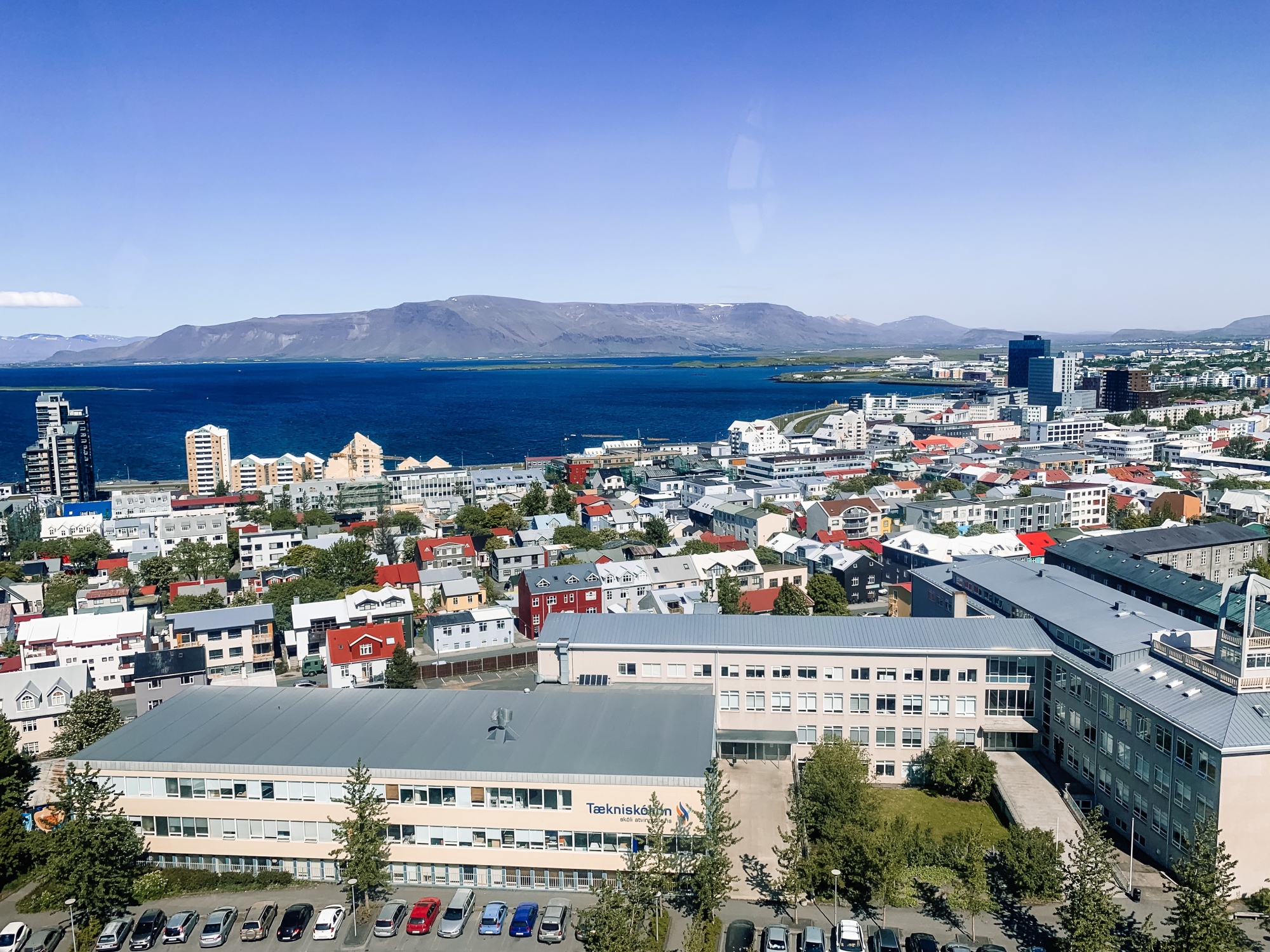 I’m going to start this post by telling you that if you ever get the chance to go to Iceland, GO!

Iceland is probably THE coolest place I’ve ever traveled to. It is otherworldly and really feels like you are on another planet. It’s small and a quick flight from the U.S.! My brother and I were able to spend a 24-hour layover in Reykjavik with a wonderful couple who are missionaries there. They graciously let us stay with them, fed us, toured us around, and drove us to and from the airport. (Mike and Sheila, you are amazing and we are so thankful for your company, graciousness, storytelling, and delicious food!) This saved us the cost of a hotel room, transportation, and the trouble of trying to find things by ourselves. 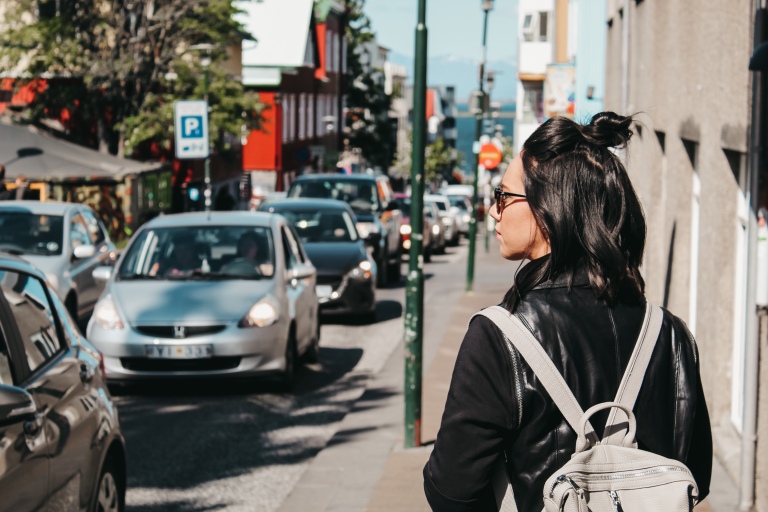 Here’s how we spent our 24 hours in Iceland:

My brother and I flew from DFW airport, with a layover in Boston, into Reykjavik on a fairly quick five hour flight. We technically flew “overnight” with the time changes, so by the time we landed, we were exhausted and had been up for 24 hours. However, I think all of us travelers have felt that second wind and adrenaline kick in when you land in a new country. We were so excited to be in Iceland- a place neither of us ever thought we’d go. We also wanted to take advantage of every minute we had on this short, one-day trip. It was nine o’clock in the morning on Reykjavik time and the beginning of our day to explore. 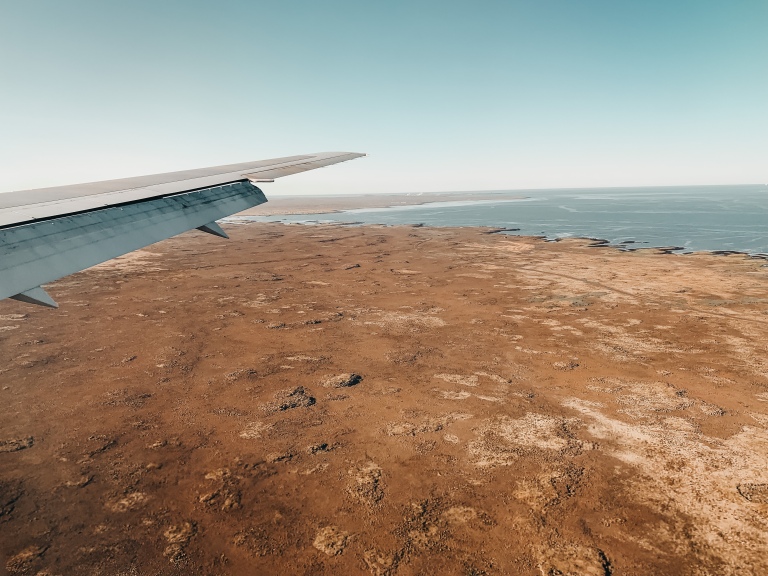 Mike picked us up from the Reykjavik airport and immediately took us to grab coffee (thank the Lord for that sweet brew) and a snack. Then he graciously offered to drive us around anywhere we wanted! He drove us all around Icelandic countryside with many stops to get out and look around, take pictures, and feel the chilly air that helped keep us awake. Iceland has huge areas that are covered in cooled lava and is mostly flat. It was intriguing to me that there were almost no trees because of this exact reason. 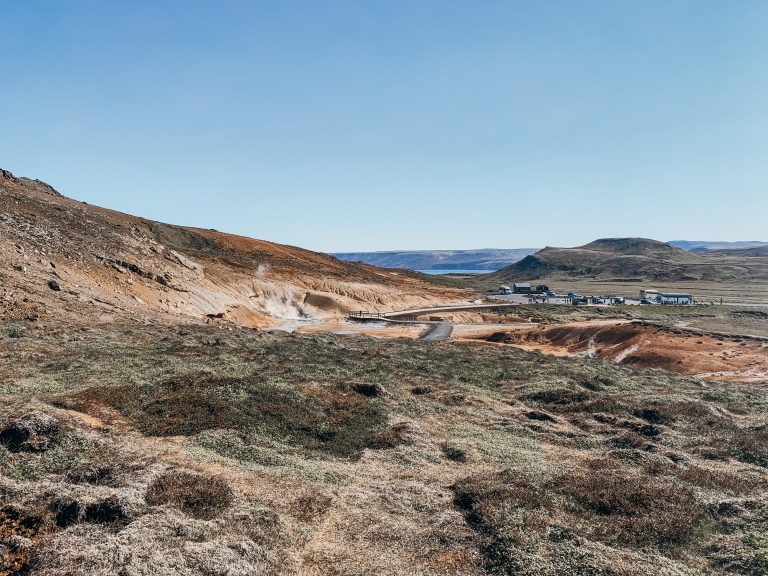 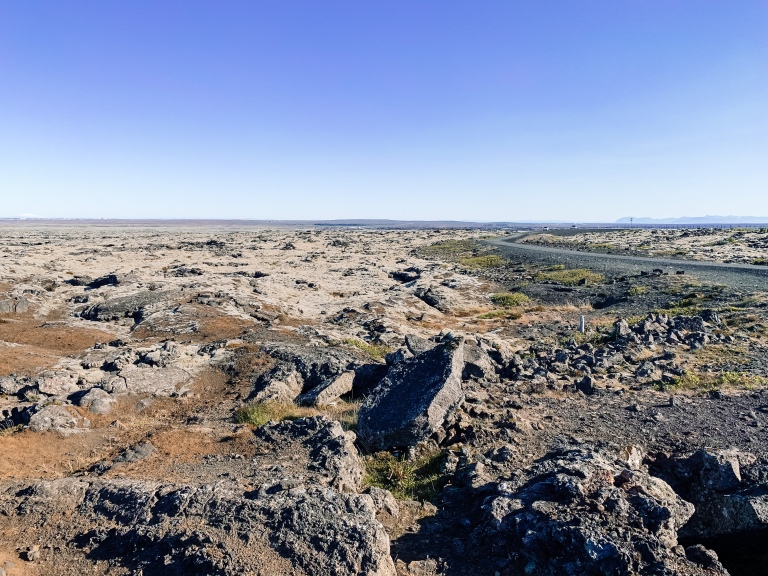 We drove for probably about two to three hours total, with a stop at The Blue Lagoon, before heading back to Mike’s house to freshen up and eat a home-cooked meal. The food was delicious, but the conversation and company was even better. Mike and Sheila told us all about Iceland including its many traditions and silly quirks. My favorite tidbit to learn was the mythical folklore of Faroese elves. These elves are supernatural beings that live in nature but exist in a parallel world to humans and can make themselves visible at will. Many Icelandic people truly believe in the existence of the elves and claim to have seen them all over the country! (Apparently, they also steal stones for themselves).

Mike took us to Hafnarfjorour which are famous geysers that also smell like rotten eggs! The geysers are not “knock-your-socks-off and splash-you-in-the-face”geysers, but they were mega cool. This was another experience I probably would have never had if it were not for Mike and his knowledge of the countryside. 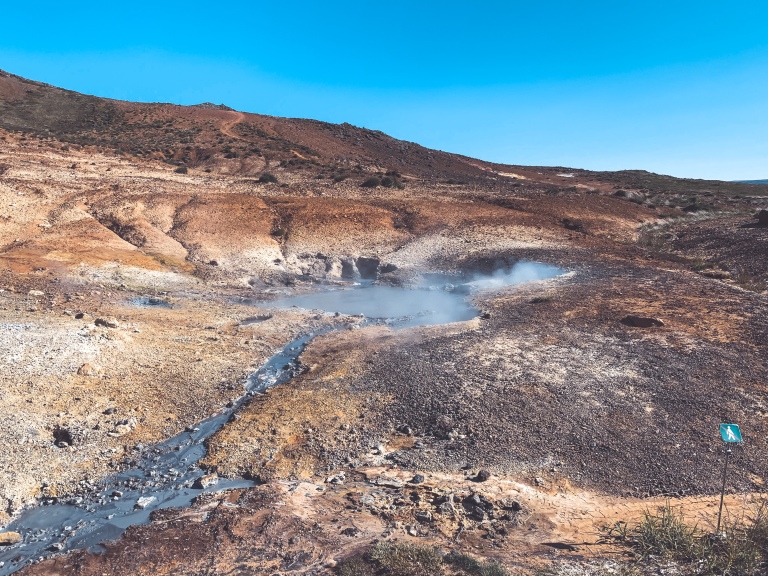 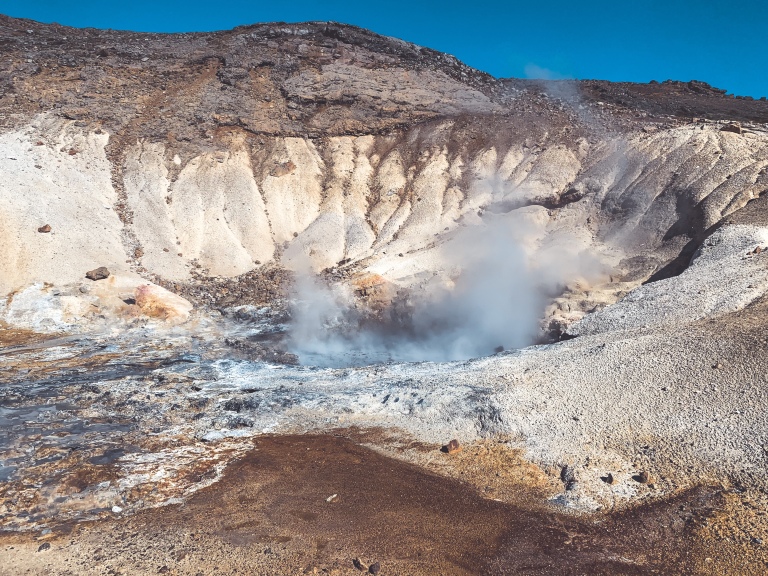 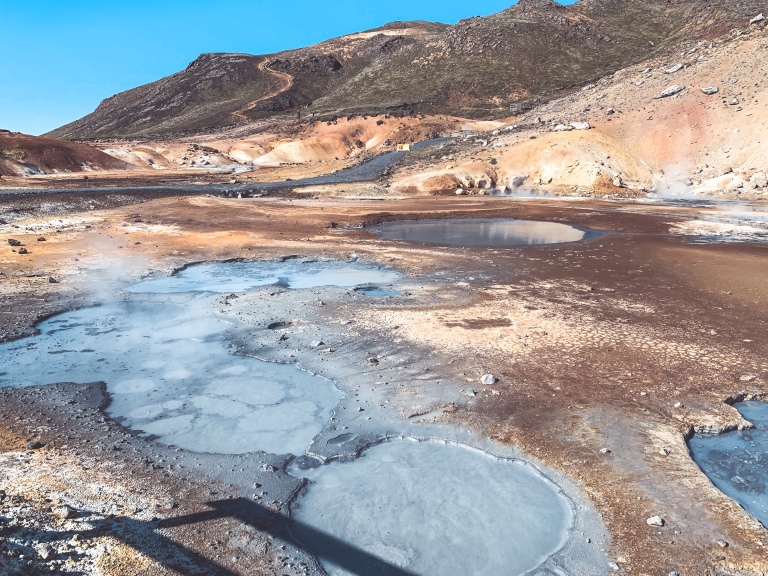 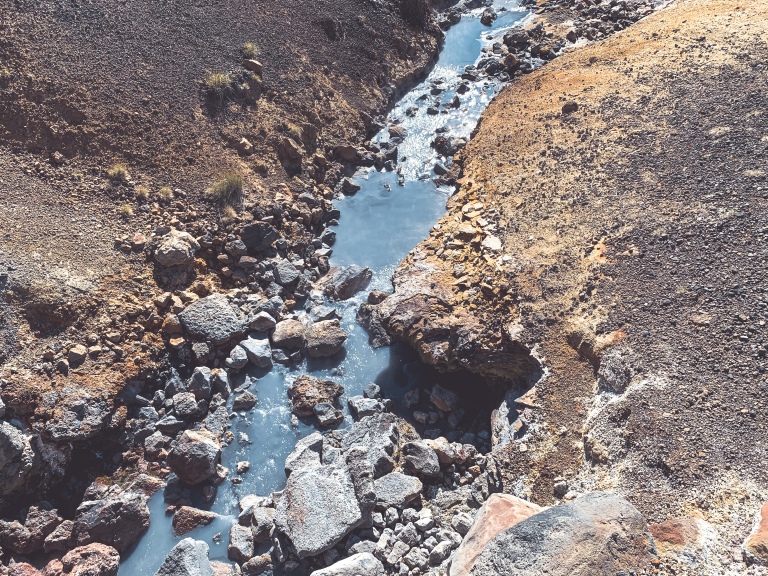 Here’s some more pictures of our road trip. 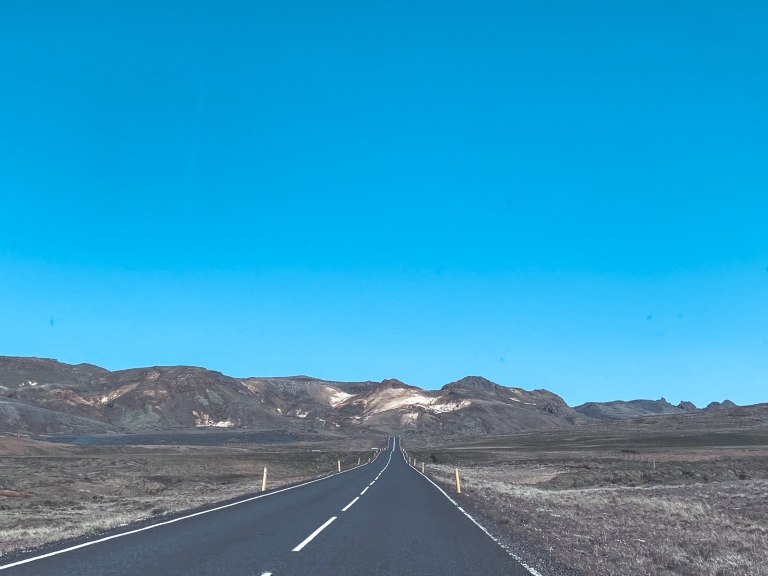 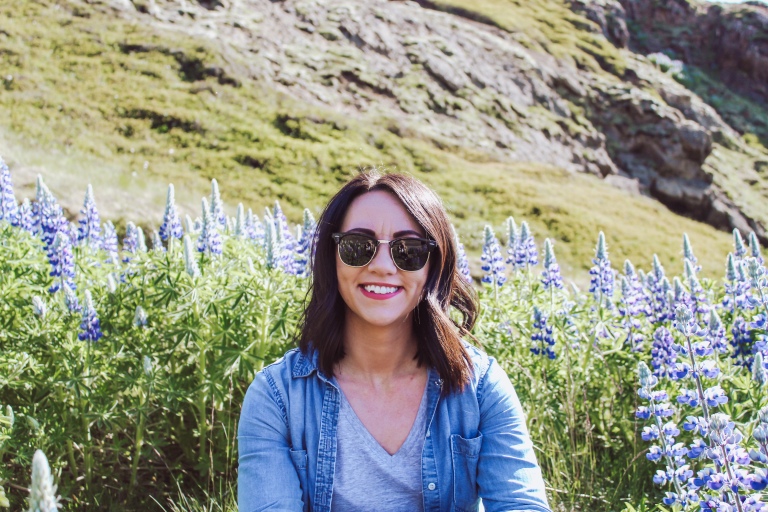 Of course, we couldn’t come to Iceland and not see The Blue Lagoon! Due to lack of time, we did not have the whole swimming/spa experience that many come here for. The Blue Lagoon does let visitors come in for free to a certain extent. We got to see plenty and it was well worth seeing a “bucket list” location that many people dream about. (P.S. There’s a restaurant you can eat at without paying for the spa package). Pictures do not do this place justice. 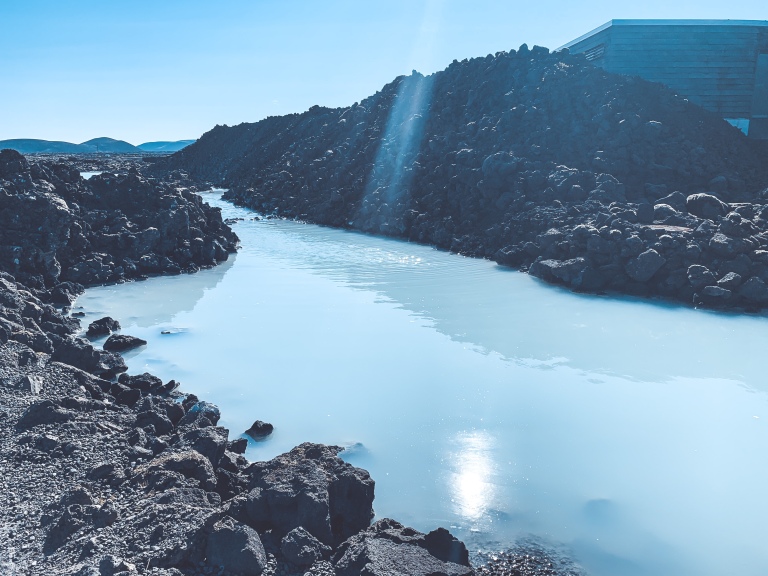 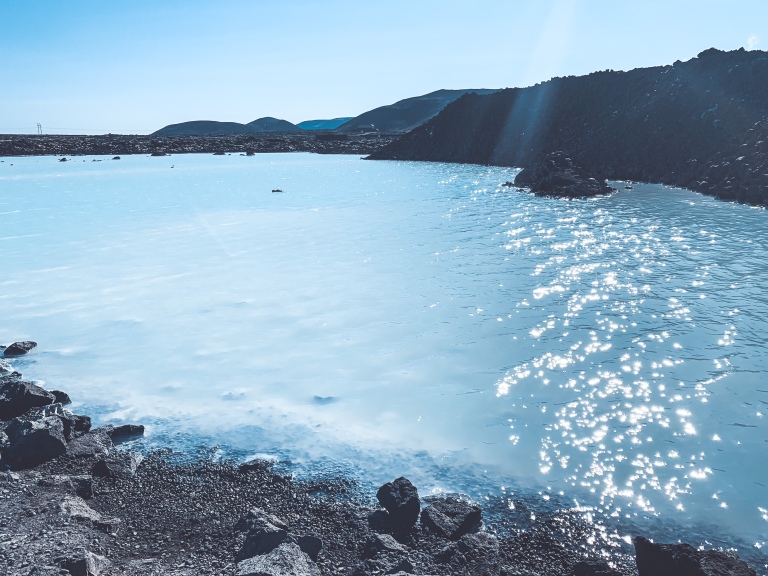 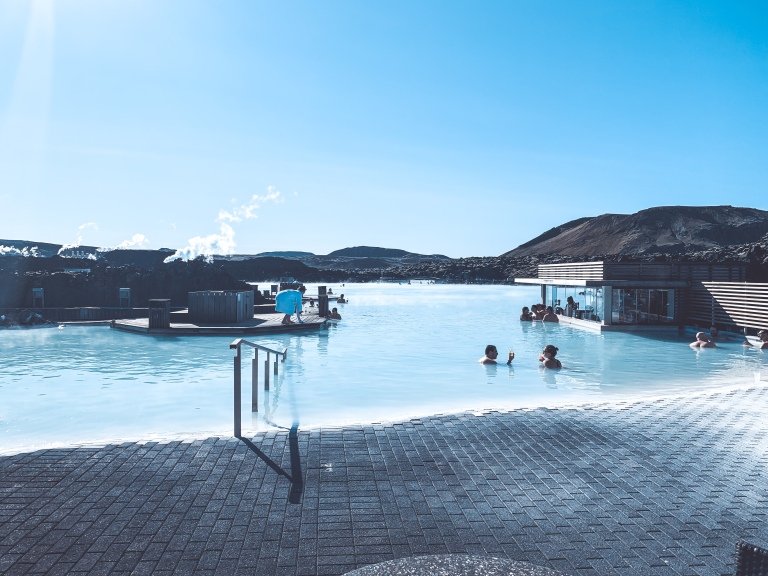 After hitting the “reset” button at Mike and Sheila’s house, Mike dropped us off in downtown Reykjavik at Hallgrimskirkja Cathedral (try saying that three times- or just once). I was SO pumped to visit this cathedral because it is extremely unique. My brother and I explored the inside and paid to climb to the top for pictures. It was FREEZING and very windy up there, but the view of Reykjavik is stunning. 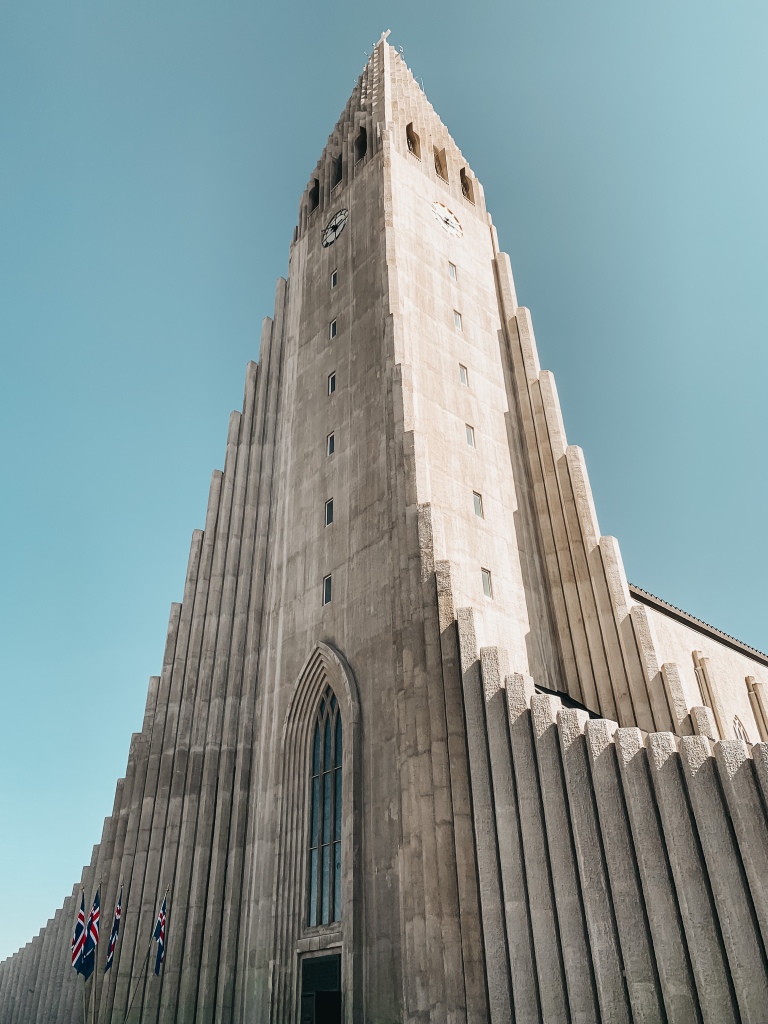 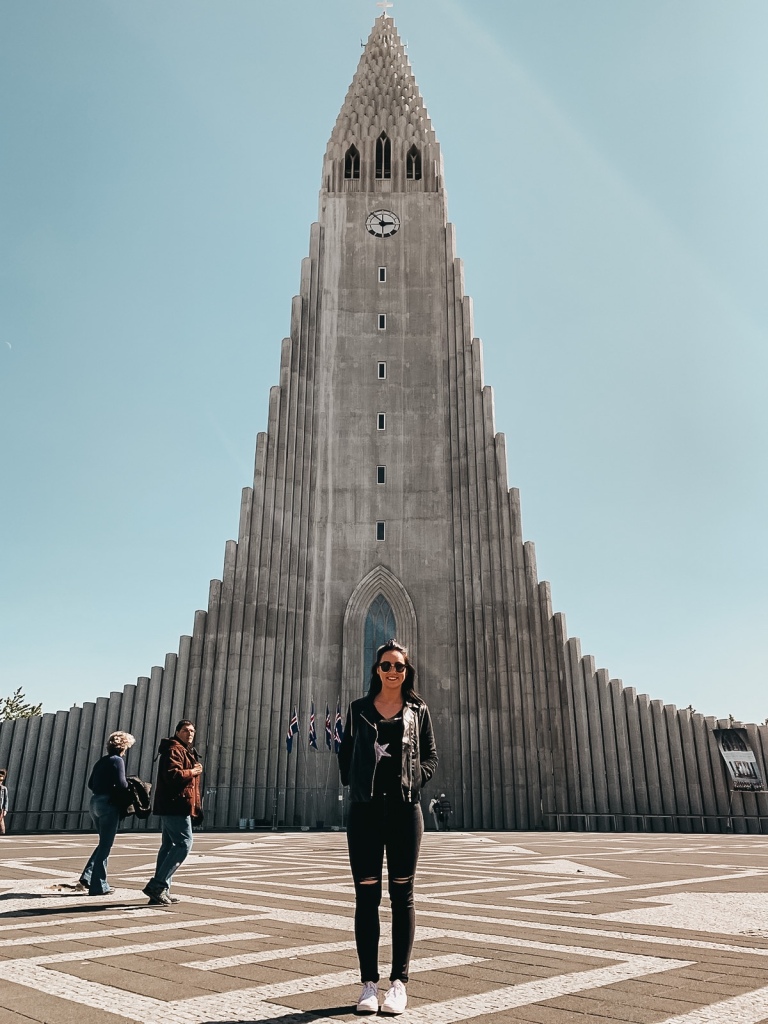 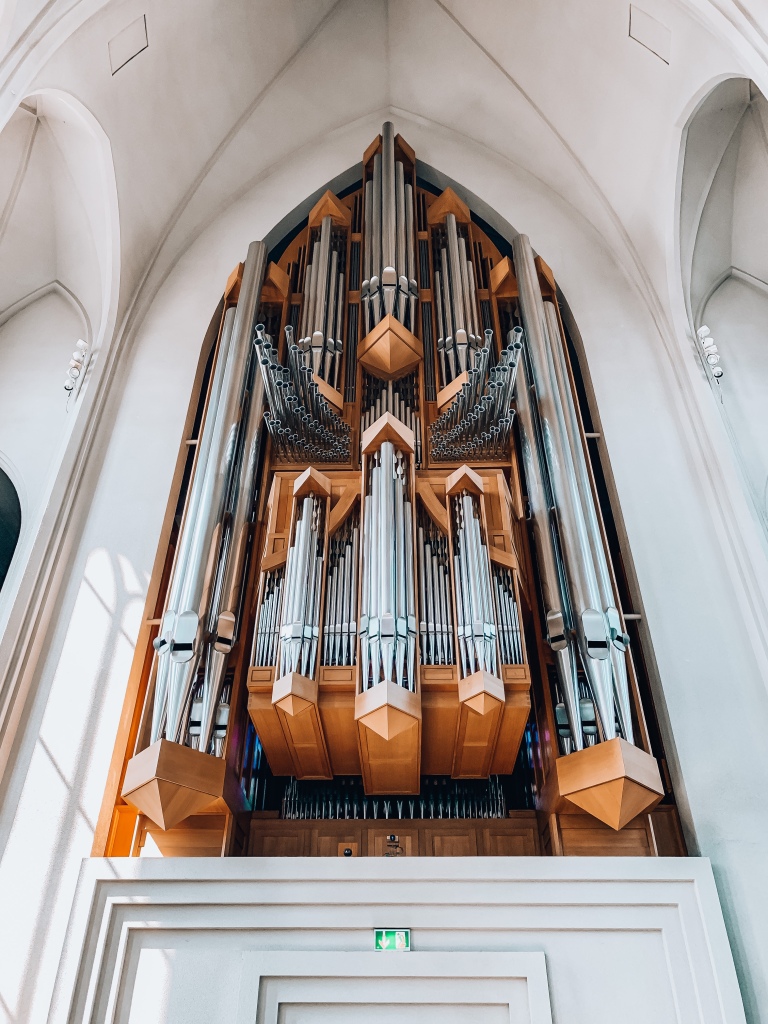 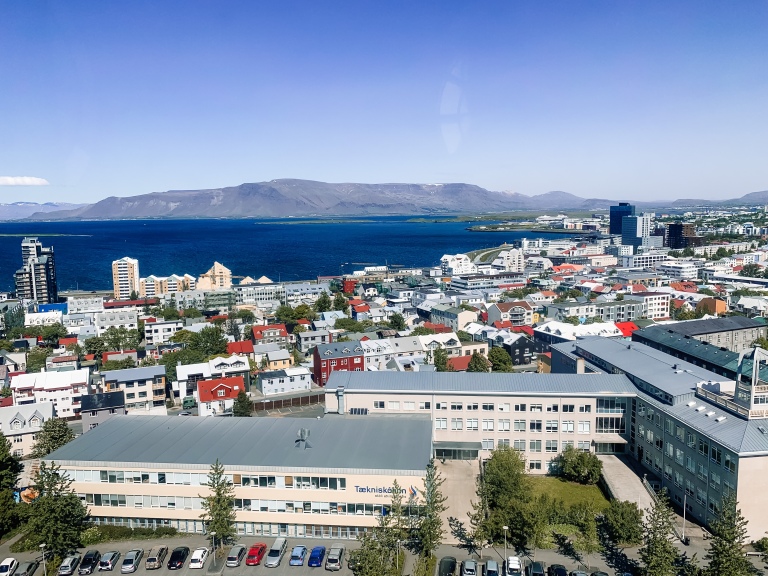 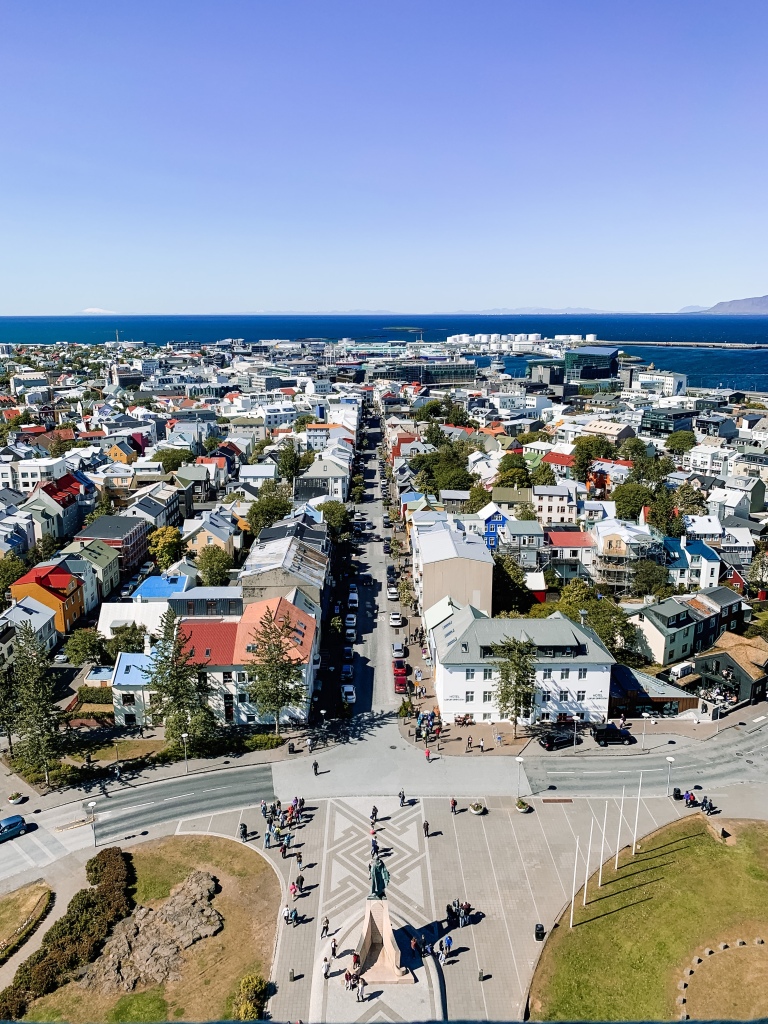 Downtown Reykjavik is very small and easy to navigate, especially if you’ve been to bigger European cities before. Matt and I used the map to find a few specific locations, but other than that, it’s a walkable city and pretty straight-forward. We stopped for coffee, snacks, and popped into several bookstores and tourist shops for trinkets to remember our day. This is always a must for me in every city I travel to: get to know the city, let it move you where it wants to you to go, and just walk. It’s the best! 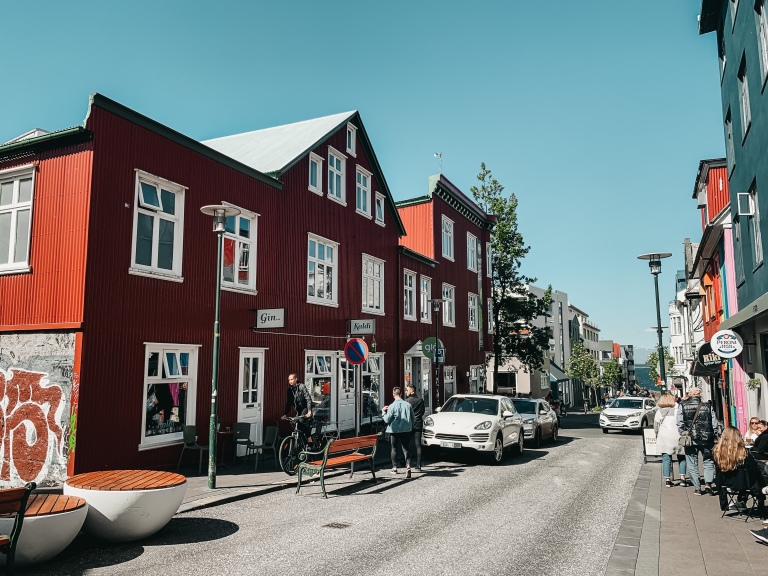 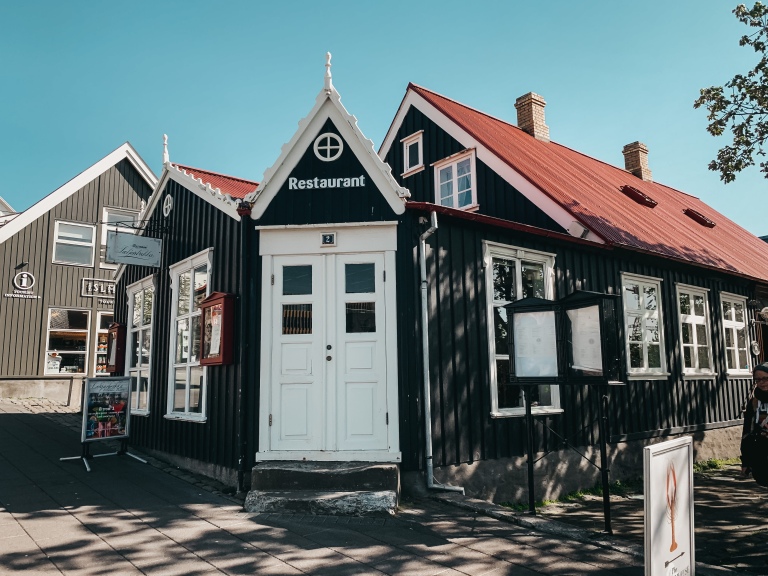 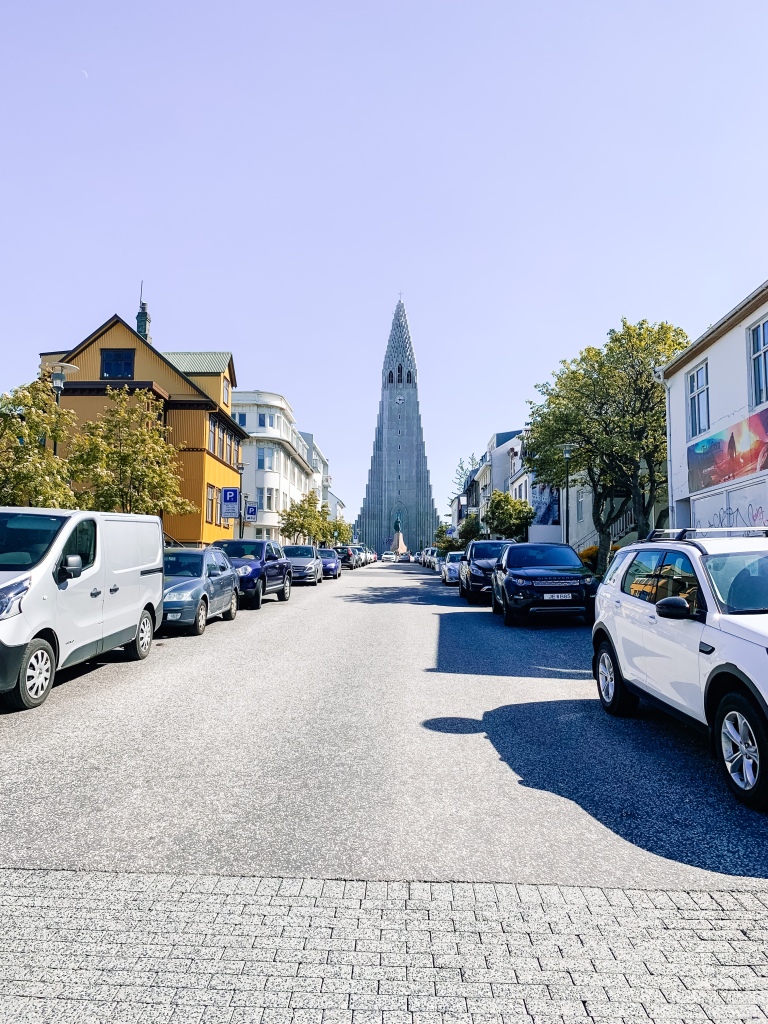 I’m not going to lie, visiting this famous hot dog stand was probably what I was most excited to do in Iceland, HA. I had heard about it from every travel video, blog, and Instagrammer visiting Reykjavik. Baejarins Betau Pylsar is pretty iconic and known for the lamb hot dogs they make. My brother and I got the “classic” with all the fixings (oops, my Texan is showing), and it was absolutely delicious. A must if you go to Reykjavik! 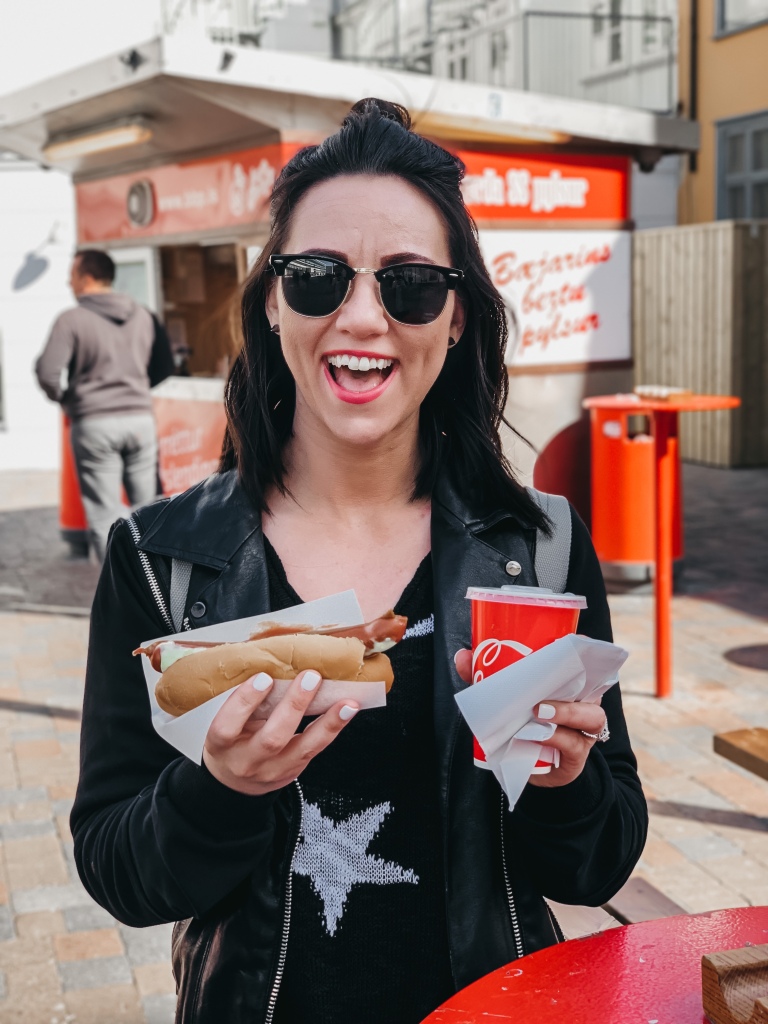 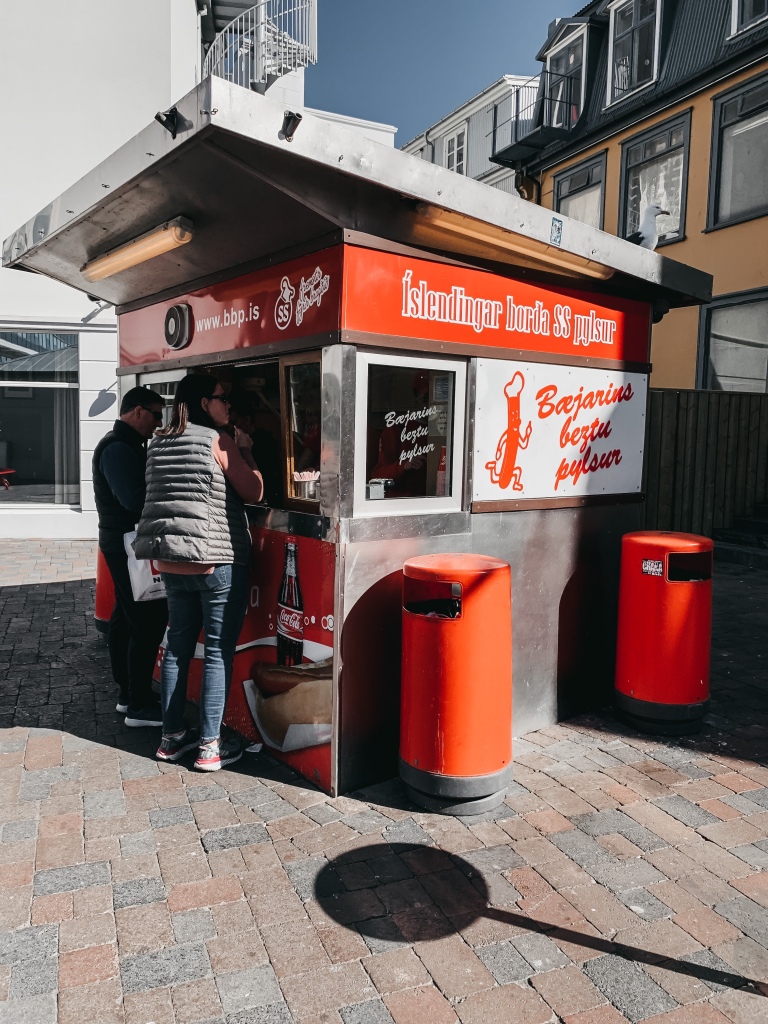 We could see Harpa Concert Hall very clearly walking around the city and it was an easy point of reference for where we wanted to end up. It’s right off the water too. The architecture is modern and unique, and obviously made for a great photo-op (shout out to my brother, Matt, who is basically my personal photographer). The exhaustion was hitting us by this point, so we took the opportunity to sit down and relax for a minute before walking by the water towards The Sun Voyager. 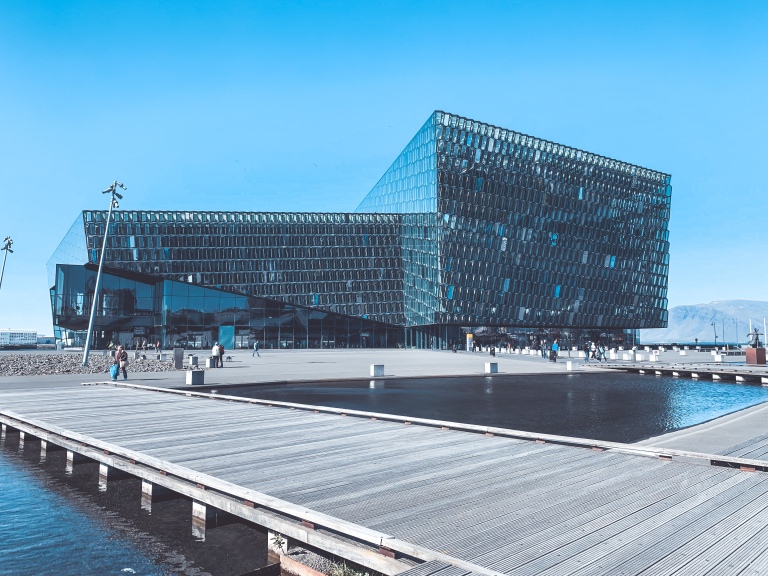 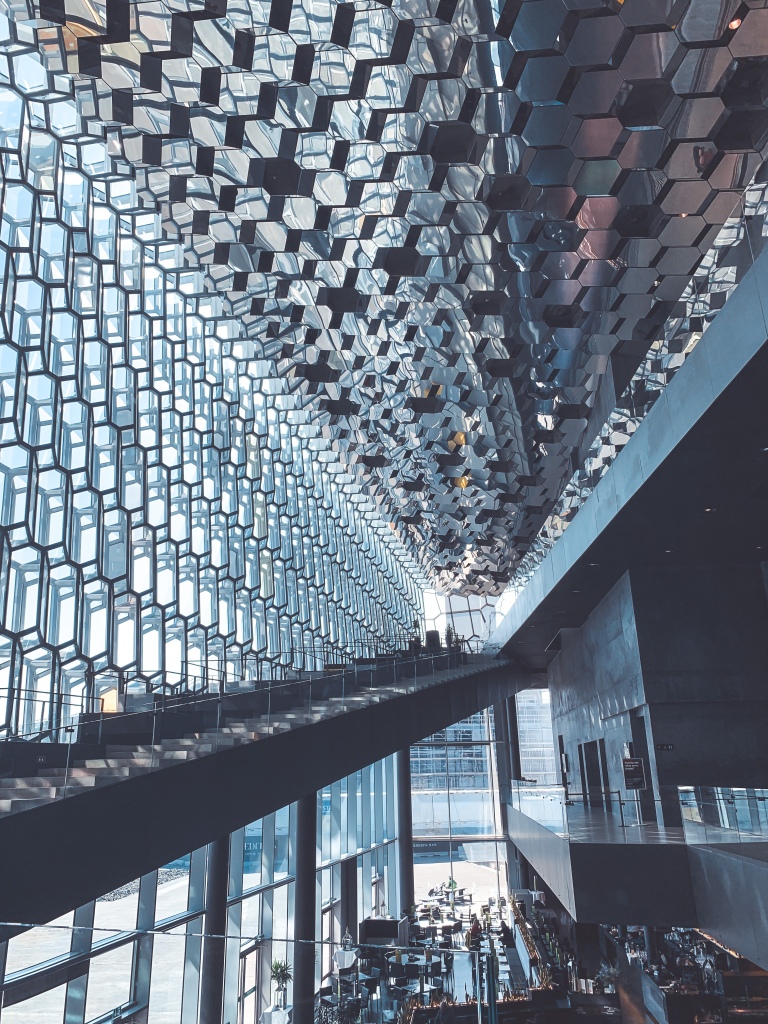 The Sun Voyager is a monument representing a Viking ship. It’s stunning and very popular. We waited a good ten minutes to get a picture without someone in it. Another must-see. 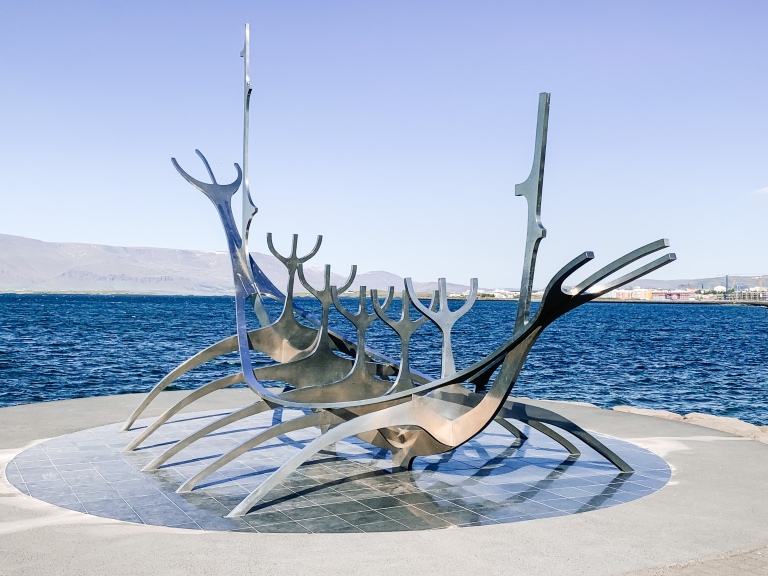 After our road trip and exploring, it was about dinner time and we were beyond tired. We decided to head back to the house for another homemade meal and try to get in bed early for our flight to Paris the next morning. At this point, we hadn’t slept in probably 30 hours or more.

During the summer months, Iceland only has four hours of daylight! Isn’t that wild? So at midnight, it was still light outside. It was only dark from about 12-4am. Luckily, sleep came pretty easily with our sleepless layover.

Mike dropped us off at the Reykjavik airport the next morning for our flight to Paris. At first, luck did not seem to be on our side. The airline moved our seats last minute so that we wouldn’t get to sit together, and there was a puking passenger waiting to get on the plane that decided to sit next to us before boarding! To top it off, IcelandAir said that my standard carry-on was “too big” and I needed to check it. We weren’t happy.

HOWEVER, we decided to take a shot at asking a flight attendant about moving seats. I told her our situation and asked her if there were any seats leftover together to maybe think of us (fingers crossed). Well, this angel from heaven instead bumped us to FIRST CLASS! Matt and I were buzzing with whispered excitement, trying not to look too giddy and childish to the other people in first class. It was the best flight EVER. We even got the see the Eiffel Tower as we flew into Paris which has never happened on any previous flights for me! We were living our best lives. 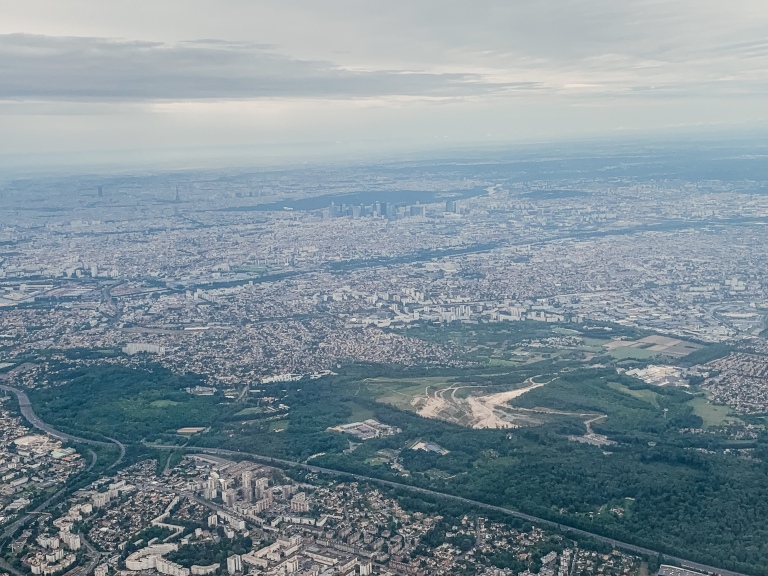 Can you spot the Eiffel Tower? Hint: look towards the top left 🙂

All in all, I’m convinced Iceland is the best way you could ever spend a 24-hour layover. If you get the chance to do so on the way to somewhere else, don’t bypass the opportunity. I’m motivated now to return someday and explore the rest of the country!

Until next time….stay safe, wash your hands, and dream about traveling again. We’ll get back out there friends.

Follow The Traveling Teacher on WordPress.com
Join 245 other followers